Do you need the best VPN for TikTok to access the app in places where it cannot be accessed? To enjoy this app to the fullest, it is advisable to get a good VPN, and you are about to find out why.

The chances are that you have heard of TikTok; seriously, how could you not? Its rise to the top of social media apps has been crazy. TikTok is used for watching, creating, and sharing videos. It involves lots of dancing, usually to music from your phone. It is really fun, entertaining, and exciting. It has 800 million users for a reason! Content created on TikTok can be shared amongst various other users, and one’s video(s) could even ‘trend.’ However, the app is more than just for video creation and sharing. You can follow other users, like or dislike their videos and leave comments. In short, TikTok is a whole community on its own.

Best VPN for TikTok: Why do you need it?

A VPN will help keep you safe from bandwidth throttling which is when your internet service provider slows down your connection speed in order to save money. By switching over to a VPN, you can enjoy faster streaming speeds without worrying about your experience being ruined by buffering and sluggish internet.

How does this work? Your IP address is hidden from the ISP, and you’re allowed to use the VPN server’s IP address. The VPN server acts as a middleman between you and TikTok.

Contents may be hidden under the guise of being inappropriate or negative, and you only get to see videos that the censors want you to see. It could be pretty boring or/ and frustrating not to be able to access certain videos, especially since the description of ‘negative contents’ is a bit vague. With a good VPN, you can sidestep the censors and go ahead to watch whatever you want to watch.

TikTok is a China-based app, and it has been rumored that China uses its applications to spy on citizens of the world. While we can neither confirm nor deny those rumors, we do know a way you can hide your personal information, like location and identity, from the public with a good VPN for TikTok, like VPN Vault by Appsverse.

Connecting to a public hotspot leaves your phone at the risk of attack from malicious individuals. You definitely do not want this and so you need a VPN to keep your device safe. Having a VPN app working while you connect to the internet makes you anonymous and inaccessible to anyone who might want to cause harm to your device.

Best VPNs For TikTok: VPN Alternatives For You

A lot of free VPNs do not work well with TikTok, most of the time because they are too slow or they expose your privacy. It is necessary to find the best VPN for TikTok that is safe to use and is also very fast. This ensures that you don’t have to waste time waiting for videos to load.

VPN Vault by Appsverse is the best VPN, in our opinion, combining security, speed, and affordability.

NordVPN and Surfshark can also be used for TikTok, though with different specifications.

Don’t let any privacy concern stop you from getting premium entertainment on TikTok; get a VPN today. VPN Vault by Appsverse has Android and iOS apps, and you can be assured of a swell time while using TikTok. 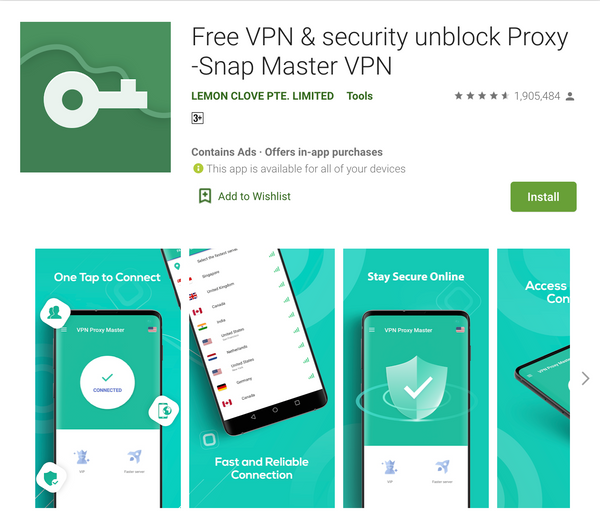 If you are looking to install Snap VPN for PC, we have news for you: it is an Android app but can be installed to PC with an Android emulator like Bluestacks.

Want to use a free VPN for Hotstar to unblock your favourite Hotstar content and shows? If yes, chances are you need the best free VPN app for Hotstar that works well to fully unblock its content.